Definition: The meter which is used for measuring the flux of the permanent magnet such type of meter is known as the flux meter. The fluxmeter is the advanced form of the ballistic galvanometer which has certain advantages like the meter has low controlling torque and heavy electromagnetic damping.

The construction of the fluxmeter is shown in the figure below. The fluxmeter has a coil which is freely suspended by the help of the spring and the single silk thread. The coil moves freely between the poles of the permanent magnet. 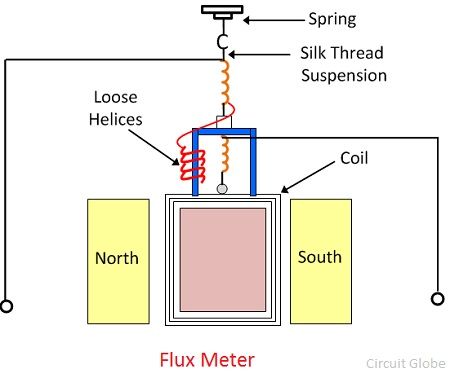 The current enters into the coil with the help of the helices which is very thin and made from the annealed silver strips. This current reduces the controlling torque to the minimum value. The air friction damping of the coil is negligible.

The terminals of the fluxmeter are connected across the search coil as shown in the figure below. The flux linking with the coil is varied by either removing it from the magnetic field or by reversing the field of the magnet. The change of the flux induces the electromotive force in the coil. This emf induces the current in the search coil and send it through the flux meter. Because of the current, the pointer of the fluxmeter deflects, and their deflection is directly proportional to the change in the value of flux linkages. 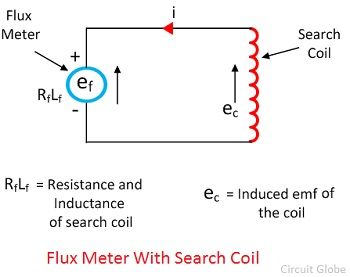 The following are the advantages of fluxmeter.

The only disadvantage of the fluxmeter is that it is less sensitive and accurate as compared to the flux meter.