These are also known as the two operating modes of the switch.

Now the question arises what is the need for such an oscilloscope?

So, we know to analyse or study multiple electronic circuits, the comparison between their voltages is really important. Hence to compare the different circuits, one can use multiple oscilloscopes.

But simultaneously triggering the sweep of each oscilloscope is a quite difficult task.

Thus we have used dual trace oscilloscope provides two traces by making use of a single electron beam.

The figure below shows the block diagram of a dual trace oscilloscope: 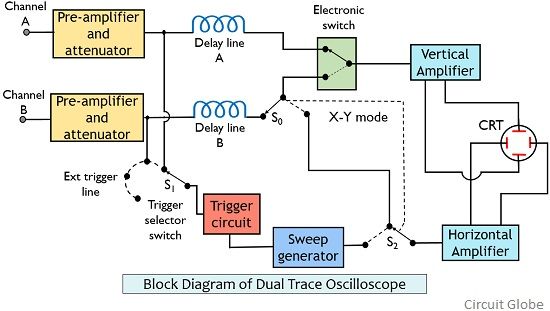 As we can see in the above figure that it has two individual vertical input channels namely A and B.

The circuit also has a trigger selector switch that permits the circuit triggering with either A or B channel input or with the externally applied signal.

The signal from the horizontal amplifier is fed to the electronic switch by either sweep generator or channel B by switch S0 and S2.

This is the X-Y mode of the oscilloscope and permits accurate X-Y measurements.

As we have already discussed that there exist two modes of operation of dual trace oscilloscope.

Let us have a look at both the methods separately.

Whenever we activate the alternate mode, then it permits the connection between both the channels alternately. This alternation or switching between the channels A and B takes place at the beginning of each upcoming sweep.

In this way, the alternate connection of the two-channel input with the vertical amplifier is performed.

The figure below represents the waveform the oscilloscope output operating in alternate mode: 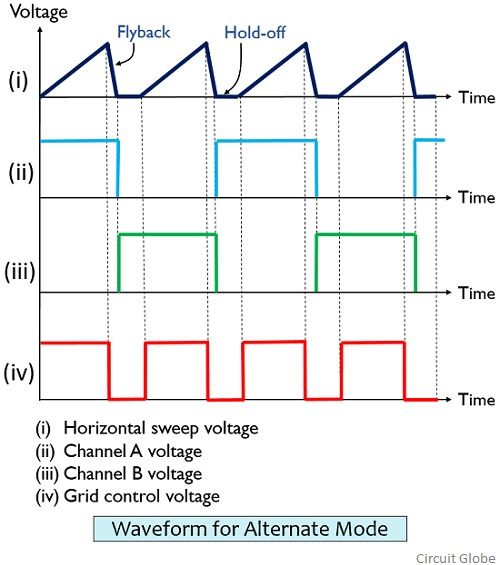 This method allows us to maintain the proper phase relationship between signals of channel A and B. However, along with advantage, a disadvantageous factor is also associated with this mode.

Alternate mode leads to a display that will show the occurrence of both the signals at different time. But in actual practice, the two events occur simultaneously. Also, the method cannot be used for the representation of the low-frequency signal.

In this mode of operation during a single sweep, several times switching between the two channels occurs. And this switching is so quick that even for the very small segment the display is available at the screen.

The figure below shows the waveform representation in case of chopped mode: 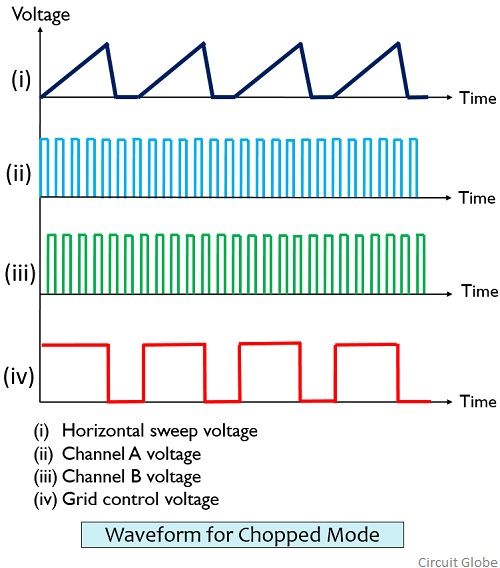 Hence in this way, the small segments of the two channels get connected to the amplifier in a continuous manner.

When the chopping rate is faster than the rate of horizontal sweep, then the separately chopped segments will be merged and recombine to form originally applied channel A and B waveform at the screen of CRT.

However, if the chopping rate is lesser than the sweep rate then it will definitely lead to discontinuity in the display. Therefore, in such case alternate mode is more suitable.

The dual trace oscillator permits the choice of respective mode of operation through the front panel of the instrument.