Here in this article we will see some other parameters of differentiation between the two but using a comparison chart.

A type of quantity in which measurement is defined only by the magnitude of the measurand is known as a scalar quantity. A scalar quantity never considers the direction as its only concern is associated with magnitude. So, in the case of scalar, whenever a change in quantity is noticed then it is only due to the variation in its magnitude.

Basically scalar quantities follow basic laws of algebra and thus can be easily added, subtracted, multiplied or divided algebraically just like normal numbers. However, they must contain the same units. The multiplication of two scalar quantities is known as dot product.

Let us understand scalar quantities by considering an example of distance.

It doesn’t matter whether the movement is either forward-backward or left-right. Only the range of movement is taken into consideration. Thus we say that distance is a scalar quantity. The presence of only magnitude makes this quantity simple by nature.

Vector quantities can never be divided with one another. However, the vector product of two quantities can be produced and it is said to be the cross product.

Let us take an example of ‘displacement’ a vector quantity in order to understand this.

So basically displacement is defined as the path length covered in a certain direction by an object. Thus we say in case of displacement the direction of movement is a crucial factor for its determination. 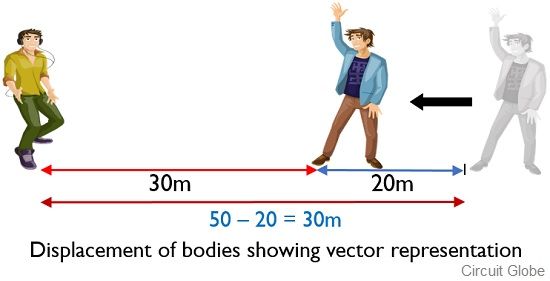 Therefore, we can say that the magnitude of displacement can be equal or less than the complete length of the path. Because, if the object is moving in forward and reverse direction then in case of change of direction, the net traversed path will get subtracted.

So, this discussion concludes that each and every quantity can be either scalar or vector depending upon whether it is concerning direction or not.