Voltage is defined as the energy requires to moves the unit charge from one point to another. It is measured in volts and represented by the symbol V. The voltage is caused by the electric and the magnetic field.

The voltage is developed between the ends (i.e. the cathode and anode) of the source. The potential of the positive endpoint of the source is higher as compared to the negative points. When the voltage develops across the passive element, then it is called the voltage drops. The sum of the voltage drops in a circuit is equal to the EMF according to Kirchoff’s law.

The energy supply from the source to each coulomb of charge is known as the EMF. In other words, it is the energy supply by some active source such as the battery to the unit coulomb charge. The EMF stands for the electromotive force. It is measured in volts and represented by the symbol ε. 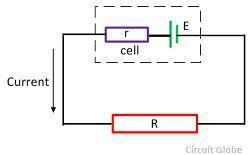 Key Differences Between EMF and Voltage

Volt is the SI unit of both the EMF and the voltage.

7 thoughts on “Difference Between EMF and Voltage”