Due to structural variation, concave and convex mirrors possess differences in the properties displayed by them.

Mirrors are regarded as reflective surfaces from where the falling light from the object gets bounced off thereby producing real or virtual images. A ray of light is unable to pass through a mirror.

In its simplest form, a mirror is a flat glass piece, one side of which is polished with silver nitrate or aluminium. Due to this, the light falling on its unpolished surface fails to penetrate the glass. Such a flat glass piece is known as a plane mirror. Other than plane mirrors, the other two types of mirrors are concave and convex which we will discuss in this article.

Concave mirrors are the type of mirrors that are designed with an inward curve at the center in order to focus the light at a single focal point by reflecting it inward. Concave mirrors display different types of images according to the distance of separation between the mirror and the object.

Consider the figure shown below represents a number of parallel rays incidenting on a concave mirror: 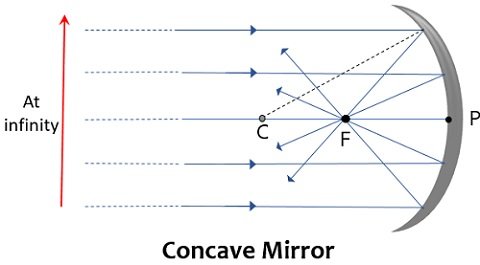 As it is clearly shown in the figure above that the parallel rays after reflection are intersecting on the principal axis at a common point. This point is regarded as a focal point and is denoted by F. From the above figure, it is clear that the focus lies in front of the concave spherical mirror.

The distance that separates the pole of the mirror and the focal point is called focal length and is denoted by f.

Convex mirrors are the type of mirrors designed with an outward bulge at the center so that light from the object can directly fall on it. It is also known as diverging mirror due to its ability to diverge the rays falling on its surface after reflection. This is said in reference to the fact that in convex mirrors when parallel rays strike the reflective surface then the beams get diverged.

The figure below represents a number of parallel rays falling on the convex spherical mirror:

It is clearly shown above that light from an object at infinity falls on the outward curved region of the convex mirror. On striking the surface, the rays try to diverge from the principal focus hence, the image will be formed at the focus, in the backside of the mirror. The image produced by the convex mirror is virtual and upright.

1 thought on “Difference Between Concave and Convex Mirror”