Concave and Convex are two types of lenses that possess variation in physical shape as well as their properties. The crucial difference between concave and convex lens is that a concave lens diverges the light rays that incident on its surface. On the contrary, a convex lens has the ability to converge the light rays passing through it.

These two lenses display distinct properties and have different applications according to the shape of the lens. Let us first understand:

What is a Lens?

A lens is known as an optical instrument that either converges or diverges the light beam that incidents on its surface by using the principle of refraction. It is actually a piece of glass in an appropriate shape which is responsible for converging or diverging the light rays. It is moulded in a way to refract the light rays in order to form an image.

The power of the lens is defined in terms of a measure of convergence or divergence, the lens introduces to the light rays that incident on it. Here we will see how a concave lens is different from a convex.

A concave lens is a type of optical lens where the surface of the glass is curved in an inward direction making the center thinner than the edges. Its outer surface somewhat resembles a cave.

When a light ray falls on the surface of the lens then it bends the light rays passing parallel to its principal axis. Basically, the curvature of the lens is responsible for the direction in which the ray bents, the amount with which it bents, and the material of formation. In a concave lens, the center is quite thinner than the edges thus the curve is present in an inward direction. So, when the light rays pass through it then despite bending towards a single point, it disperses. 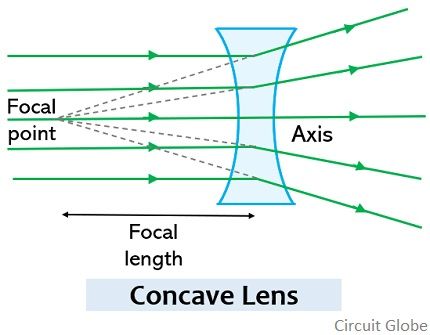 In the concave lens, the path of the rays is traversed behind the lens so as to get the focal point. As the rays diverge in the case of concave lenses thus, their focal length is negative.

A type of optical lens whose surface is bulged in an outward direction making the center thicker than the edges.

We have already discussed that when light from an object incident on the surface of the lens then it gets bent. Also, the direction of bending depends on the curvature and material. So, as in the case of the convex lens as the center is thicker than the edges thus the ray of light passing through it gets bent in an inward direction towards a single point. Thereby giving rise to the convergence of light rays hence, called a converging lens. 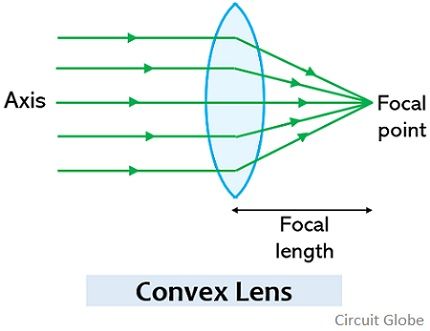 The single point towards which the rays bent is the focal point thus in the case of convex lenses, the focal point is present on the opposite side of the region from where the rays are falling. Thus, its focal length is positive.

Thus, the above discussion between a concave and a convex lens concludes that both have different physical shapes and generates a different form of images when light rays incident on it thus have different applications.

4 thoughts on “Difference Between Concave and Convex Lens”