The Carey Foster Bridge is used for measuring the low resistance or for the comparison of two nearly equal resistances. The working principle of the Carey foster bridge is similar to the Wheatstone Bridge.

The circuit for the Carey foster bridge is shown in the figure below. 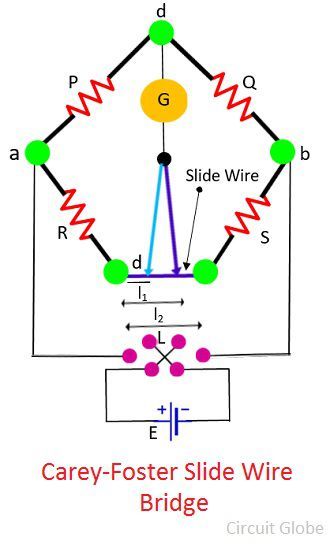 Consider the equation for first balance

The r is the resistance per unit length of the sliding wire.

After interchanging the R and S, the balance equation of the bridge is

For the first balance equation

And for the second balance equation

The difference between the resistance of S and R is obtained from a distance between the length of the slide-wire, i.e.,  l1 – l2 at balance condition.

By solving the above equation, we get

Note: The special switch is used for interchanging the resistor S and R during the test.