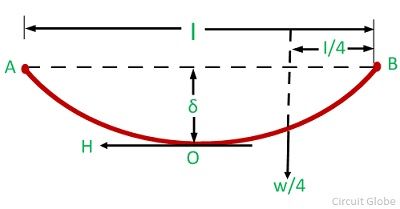 Consider  OB  is the equilibrium tension of the conductor and force acting on it are the horizontal tension H at O. The weight (w.OB) of the conductor OB acting vertically downwards through the center of gravity at a distance l/4 from B, and the tension TB at the support B.

Since OB is approximately equal to the l/2

Take moments about B

Calculation of Sag and Tension at an unequal level supports

In hilly areas or sloping grounds, the supports are not usual at the same level. For the calculation of sag and tension at unequal supports level consider a conductor AOB. The portion of OA and OB may be treated as catenaries of half span x and l-x respectively shown in the figure below. 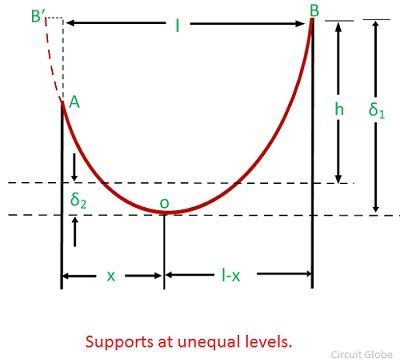 The sag at OA and OB is expressed by the equations

The tension A and B are given by

For calculation, it is assumed that the AOB is the parabola. 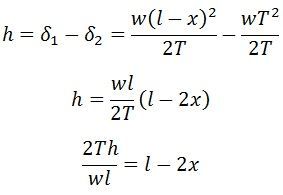 The value of x obtained above may be substituted in equation (5) to calculate sag at OA . Equation (8) shows that the lowest point lies outside the span AB. Hence, the conductor in the span under consideration exert an upward force, and the conductor tends to swing clear of the lower support.

12 thoughts on “Calculation of Sag & Tension”