Definition: It is the measure of the ease with which flux can be set up in a material. In other words, it measures the magnitude of the flux for the number of turns in an electric circuit. The permeance is analogous to the conductance in an electrical circuit.

It is given as the reciprocal of the reluctance (S) of the material in a magnetic circuit. It is denoted by P and measured in Weber per ampere turns (Wb/AT) or Henry (H). The permeance of the magnetic circuit is expressed as: 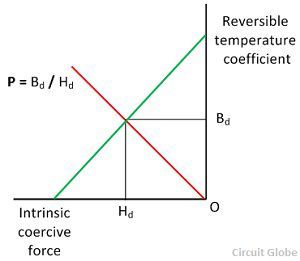 The permeance coefficient is express as

The reversible temperature coefficient shows the relative change in the physical properties and the temperature of the ferromagnetic material. And the intrinsic coercive force measures the ability of the material to withstand, an external magnetic field.