The Fleming right-hand rule determines the direction of the induced EMF.

On applying the right-hand rule in the figure shown below, it is seen that the direction of the induced emf is opposite to the applied voltage. Thereby the emf is known as the counter emf or back emf.

The back emf is developed in series with the applied voltage, but opposite in direction, i.e., the back emf opposes the current which causes it. 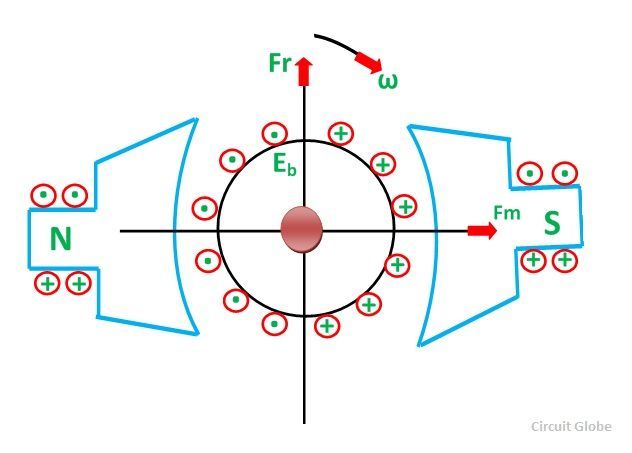 The magnitude of the back emf is given by the same expression shown below:

A simple conventional circuit diagram of the machine working as a motor is shown in the diagram below: 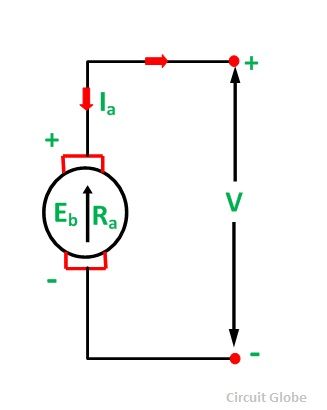 In this case, the magnitude of the back emf is always less than the applied voltage. The difference between the two is nearly equal when the motor runs under normal conditions.

Advantages of Back Emf in DC Motor

The mechanical energy induced in the motor is the product of the back emf and the armature current, i.e., EbIa.

Let’s understand how the back emf makes motor self-regulating.

The back emf in the dc motor is expressed as:

The maximum power developed on the motor is expressed by

On differentiating the above equation we get 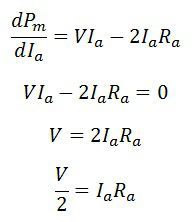 From the back emf equation, we get

On substituting the IaRa in the above equation, we get

The above equation shows that the maximum power is developed in the motor when the back emf is equal to half of the supply voltage.

5 thoughts on “Back EMF in DC Motor”