For the analysis of electrical machines or electrical machine system, different values are required, thus, per unit system provides the value for voltage, current, power, impendence, and admittance. The Per Unit System also makes the calculation easier as all the values are taken in the same unit. The per-unit system is mainly used in the circuit where variation in voltage occurs.

Firstly the value of base power and the base voltage are selected, and their choice automatically fixes the other base values.
As

Advantages of Per Unit System

There are mainly two advantages of using the Per Unit System. 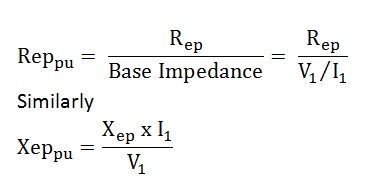 Where Rep and Xep are resistance and reactance referred to primary and pu means in the per-unit system.

Therefore, from the above two equations, it is clear that the need for an ideal transformer is eliminated. This is so because the per-unit impedance is the same for the equivalent circuit of the transformer whether computed from the primary or secondary as long as the voltage bases on the two sides are selected in the ratio of transformation.

9 thoughts on “Per Unit System”