A Motor is a machine that converts electrical energy into mechanical energy. There is no difference between a DC motor and DC generator from a construction point of view. The only difference is that the generators are usually operated in more protected locations and, therefore, their construction is generally of the open type.

On the other hand, motors are generally used in locations where they are exposed to dust, moisture, fumes and mechanical damage. Thus, the motor requires protective enclosures.

For example – Motor requires drip-proof, fire-proof, etc. enclosure according to the requirement. The DC motors are very useful where a wide range of speeds and good speed regulation is required, such as in the electric traction system.

The EMF equation of DC Motor is given by the equation shown below:

The equivalent circuit of the armature of a DC motor is shown below: 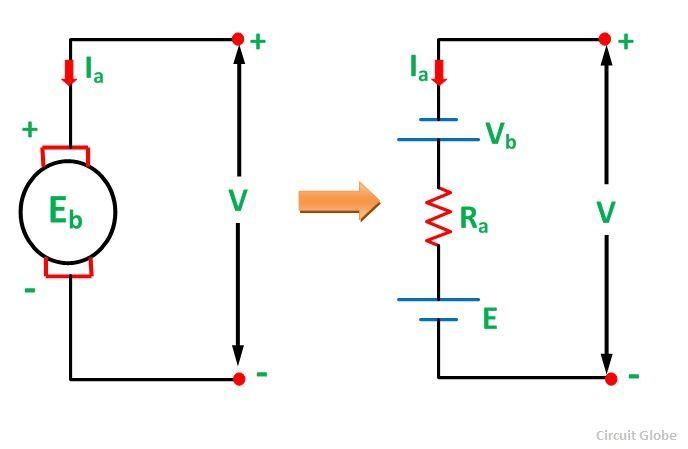 In a DC motor, the current flows from the line into the armature, against the generated voltage. By applying KVL,

The equation (1) written above is called the fundamental motor equation. It is seen that the Back EMF of the motor is always less than its terminal voltage V. The equation can also be written as shown below:

The equation (2) is considered or applicable when the voltage drop Vb in the brushes is also taken into account.