Basically when electromagnetic light propagates through air, then the back and forth movement of electrons inside the molecules of medium (air) generates an oscillating electric field inside it.

So, when photons are allowed to transmit through these molecules then some photons get absorbed but then retransmitted in multiple directions by the air molecules. This is known as Rayleigh Scattering.

The strength of scattering depends on the wavelength of light and the particle size responsible for scattering.

It is noteworthy that scattering does not occur due to collision rather it is the result of the electromagnetic interaction between photons and the particles of the medium. 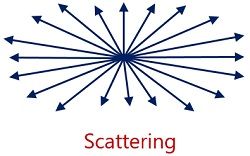 The appearance of the sky in blue colour is due to the scattering of sunlight by the atmosphere.

We know light particle strikes a molecule of atmosphere during propagation. Then the electromagnetic field of the incident light redistributes the molecular charges. This causes the vibration of the molecules and the charges start oscillating with the radiation frequency.

But this interaction somewhat changes the polarization of incident light. Due to this some of the light energy gets absorbed by the molecules of the atmosphere. This energy is then re-radiated in different directions that leads to cause scattering of light, more specifically, termed as Rayleigh scattering.

Rayleigh scattering law states that the amount of scattering of light is inversely proportional to the fourth power of the wavelength. It is given by:

This implies that in case of shorter wavelength, light is more likely to be scattered in comparison to longer wavelength, due to the inverse relationship between the two. 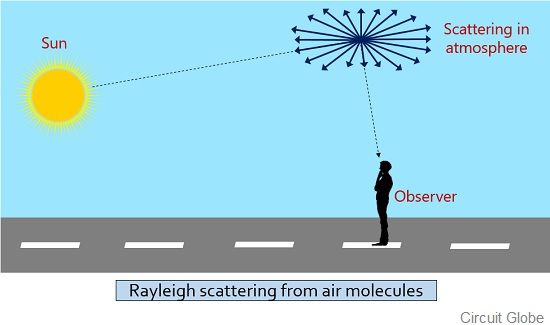 We know that the wavelength of blue colour is less than the red colour. Thus, due to the shorter wavelength, blue light scatters comparatively more than red light. This is the reason why the sky appears blue instead of any other colour.

Now, the question arises that in VIBGYOR, among all the colours the wavelength of violet colour is least. So, why the sky does not appear to be violet?

We are aware of the fact that the wavelength of violet colour is shortest. And according to Rayleigh scattering law, the light of the shortest wavelength scatters most. Still, the sky appears blue but not violet.

This is so because the spectrum of the light emitted by the sun is not uniform for all wavelength and is highly absorbed by the atmosphere. Thereby producing a vision of less violet in the sky. Even human eyes are not that much sensitive to violet colour.

This is so because retina in human eyes is composed of basically 3 types of colour cones or rods. These are red, green and blue. And these rods have the tendency to respond to these light more efficiently than any other colour. By constructing various stimulations, the vision system of a person allows it to recognize various colours.

So, the red and green cones in our retina do not recognize other colours as these are not much scattered. However, blue cones show better stimulation towards the colour near that particular wavelength. Also due to the shorter wavelength, blue colour possesses better scattering and our eyes see the light blue colour of the sky.

Scattering of transmitted light through an optical fiber is the result of inhomogeneities and defects in fiber at the time of fabrication. As we know that glass fiber is a composition of random connection of molecules.

Due to this reason, some regions in the structure may contain either high or low molecular density. This leads to the variation in the refractive index of the material at different points inside the fiber.

The variation in the refractive index leads to Rayleigh scattering of the transmitted light.

Basically, the light rather being absorbed is radiated in different directions thus termed as a scattering of light.