By clearing the fault fast with the help of fast-acting protective relay and associated circuit breaker, the damage to the apparatus is reduced, and the resultant hazards like fire, the risk of the life are reduced, by removing the particularly faulted section.

But the continuity of supply is maintained, though remaining healthy section, by clearing the fault fast, fault arising time is reduced, and therefore the system can be restored to the normal state sooner. Hence the transient state stability limit of the system is greatly improved, permanent damage to the equipment is avoided, and the possibility of developing most simple fault such as single phase-to-ground into most severe fault such as double phase-to-ground fault is reduced. 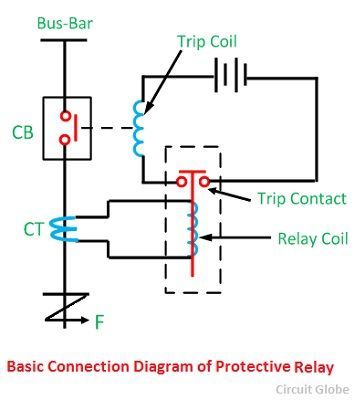 The fault can only be reduced if the protective relay is reliable, maintainable and sensitive enough to distinguish between normal and abnormal condition. The relay must come into action whenever there is a fault and must not operate if there is no fault.  Some relays are used for the protection of the power system.  Some of them are primary relay meaning that they are the first line of defence. Such relays sense the fault and send a signal to the proper circuit breaker to trip and clear the fault.

The fault may not be cleared if the circuit breaker fails to open or relay maloperates. The relay failure is because of three reasons such as wrong setting, bad contacts and open circuit in the relay coil. In such cases,  the second line of defence is provided by the backup relays. The backup relay has longer operating time, even though they sense the fault along with the primary relays.

The protective relays do not eliminate the possibility of fault occurrence on the power system rather their circuit actions start only after the fault has occurred on the system. The main features of a good protective relaying are its reliability, sensitivity, simplicity, speed, and economy. For the sake of familiarity of protective relay, we have to understand some important terms.

Trip Circuit – It is the circuit that controls the circuit breaker for opening operation and comprises of trip coil, relay contacts, auxiliary switch battery supply, etc.

Characteristic Quantity – It is designed for determining the response of the relay. Some relays have a graded response to one or more quantity called characteristic quantity.

Operating Force or Torque – It is a force which tends to close the relay contacts.

Restraining Force or Torque – It is a force or torque, which opposes the torque and tends to interrupt the closure of the relay contacts.

Setting – It is an actual value of the energizing quantity at which the relay is made to operate under given conditions.

Power Consumption of a Relay – It is the value of power consumed by the relay circuit at the rated current or voltage and expressed in VA for AC and watts for DC.

Pick Up – A relay is said to pick up when it moves from the off position to the on position or the operation of the relay is called the relay pick-up.

Operating or Pickup Relay – It is the value of the actuating quantity (current or voltage) which is on the threshold above which the relay operates and closes its contacts. If the current in the relay is less than the pickup value, the relay does not operate, and the breaker operates by it remain in the closed position.

Drop Out or Reset Level – This is the value of the current or voltage, etc. below which a relay opens its contacts and comes back to its original position. The ratio of the drop-out voltage or reset value to the pick or operating value is called the drop-out or reset ratio.

Quick Value – It is given by the time which elapses between the instant when the current or voltage exceeds the pickup values at the time when the relay contacts are closed.

Reset time – It is given by the time which passes away between the instant when the current or voltage (actuating quantity) becomes less than the reset value at the time when the relay contacts are closed.

Seal-in-coil – This coil does not allow the relay contact to open when the current flow through them.

Overshoot Time – This is the time during which stored operating energy is dissipated after the characteristic quantity has been suddenly restored from a specified value to the value which it had at the initial position of the relay.

Fault Clearing Time- It is the time between the existence of a fault and at the time of final arc quenching in a circuit breaker is called the fault clearing time.

Breaker Time – It is the time between termination of fault and final arc quenching in a circuit breaker is called the breaker time.

Relay Time – The interval between the existence of fault and closure of relay contacts is called the relay time.