A DC Motor whose poles are made of Permanent Magnets is known as Permanent Magnet DC (PMDC) Motor. The magnets are radially magnetized and are mounted on the inner periphery of the cylindrical steel stator. The stator of the motor serves as  a return path for the magnetic flux. The rotor has a DC armature, with commutator segments and brushes.

The cross-sectional view of the 2 pole PMDC motor is  shown in the figure below. 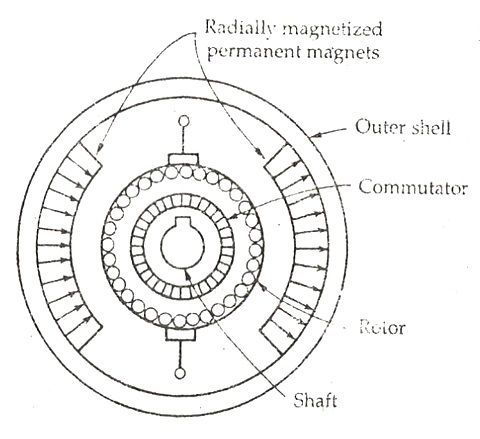 The Permanent Magnet DC motor generally operates on 6 V, 12 V or 24 Volts DC supply obtained from the batteries or rectifiers. The interaction between the axial current carrying rotor conductors and the magnetic flux produced by the permanent magnet results in the generation of the torque.

The circuit diagram of the PMDC is shown below. 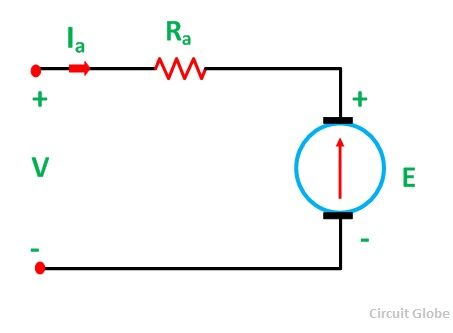 In conventional DC motor, the generated or back EMF is given by the equation shown below.

The electromagnetic torque is given as

In Permanent Magnet DC motor, the value of flux ϕ is constant. Therefore, the above equation (1) and (2) becomes

Considering the above circuit diagram the following equations are expressed.

Where k1 = k ϕ and is known as speed-voltage constant or torque constant. Its value depends upon the number of field poles and armature conductors.

The speed control of the PMDC motor cannot be controlled by using flux control method as the flux remains constant in this type of motor. Both speed and torque can be controlled by armature voltage control, armature rheostat control, and chopper control methods. These motors are used where the motor speed below the base speed is required as they cannot be operated above the base speed.

There are three types of Permanent Magnet Materials used in PMDC Motor. The detailed information is given below.

Alnicos has a low coercive magnetizing intensity and high residual flux density. Hence, it is used where low current and high voltage is required.

They are used in cost sensitive applications such as Air conditioners, compressors, and refrigerators.

The Neodymium iron boron is cheaper as compared to Samarium cobalt. But it can withstand higher temperature. Rare earth magnets are used for size-sensitive applications. They are used in automobiles, servo industrial drives and in large industrial motors.

The PMDC motors are used in various applications ranging from fractions to several horsepower.  They are developed up to about 200 kW for use in various industries. The following applications are given below.

Following are the advantages of the PMDC Motor.

The disadvantages of the PMDC motor are given below.