Definition: Oil filled cable is defined as the cable in which low viscosity oil is kept under pressure either within the cable sheath itself or a containing pipe. The oil in the cable filled the voids in the oil impregnated paper under all conditions of varying loads. In the past, over the years mineral oils are used but recently alkylates (linear decyl benzene and branched nonyl benzene) become popular because of their low viscosity and their ability to absorb water vapours liberated during ageing of cellulose.

Oil filled cables are used for long power transmission or in placed where aerial cable are impracticable to used like sea, underground hydroelectric plant or in power substations having water obstacles.

The pressure in the cable is sustained by connecting the oil channel of the cable to the oil tank. For maintaining the pressure, the oil channel is placed far away from the oil reservoir. The oil pressure reduces the formation of voids in the insulator. Oil filled cables have the following advantages over solid cables:

Oil filled cables are mainly classified into three types. These are; 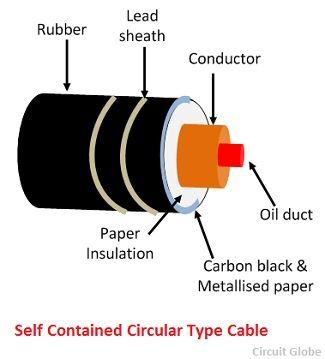 Self-contained oil filled cable have following advantages as compared to other oil-filled cables:

Such types of oil-filled cables are very widely used for the merits mentioned above.

In such type of cable three insulated cores are placed together horizontally. There is no filter material, and space is filled up with oil under pressure. The flat sides of the lead sheath are the strength with hard metallics tapes or bands and winding wires. The supporting bands are made fluted to make the cable more flexible.

When the cable is loaded, their temperature rises and the oil expands due to which the flat side of the sheath is deformed slightly. On decreasing, the load oil contracts and deflections are reduced due to the presence of resilient bands. Thus the voids formation in the dielectric during cooling is minimised. 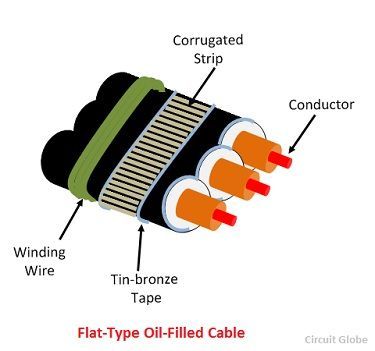 Oil storage tank is placed along the cable route at suitable intervals to allow for thermal expansion and contraction. On loading, the cable heat is produced, and oil is driven by the cable in the oil storage tanks and vice versa. Thus, the creation of voids is avoided.

A pipe type oil filled cable consists of three separate paper insulated screen cores installed in a steel pipe. The pipe is filled with insulation oil kept at a pressure of 1.38×106 to 1.725×106 N/M2. The high-pressure oil prevents the formation of voids. It also removes heat from the cable. In this type of cable, the conductor oil duct is not required.