The equal area criterion is a simple graphical method for concluding the transient stability of two-machine systems or a single machine against an infinite bus. This principle does not require the swing equation for the determination of stability conditions. The stability conditions are recognized by equating the areas of segments on the power angle diagram between the p-curve and the new power transfer line of the given curve.

The principle of this method consists on the basis that when δ oscillates around the equilibrium point with constant amplitude, transient stability will be maintained.

Multiplying both sides of the above equation by dδ/dt, we get

Rearranging, multiplying by dt and integrating, we have

Also, if the system has transient stability the machine will again operate at synchronous speed after the disturbances, i.e., 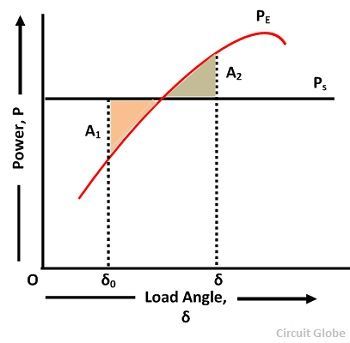 The area under the curve PA should be zero, which is possible only when PA has both accelerating and decelerating powers, i.e., for a part of the curve PS> PE and for the other PE> PS. For a generation action, PS> PE for the positive area and  A1> PS for negative areas A2 for stable operation. Hence the name equal area criterion.

The problems associated with the transient stability of the system is because of the following reasons. These are as follows

In each case, the procedure will be to determine the power angle curve for the initial conditions of the system, for the conditions under fault, and for the after fault condition and plot the curve in per unit value. Then locate the points for the load initial conditions finding out δo. Then, using equal area criterion, determine the new angle of displacement δ. The maximum angle δmax which may be allowed and the corresponding maximum permissible load can also be determined