Sometimes people get confused within these two terms, as the two are interrelated, in some or the other way. But this section will help you to understand the various factors of differentiation between the two.

where ‘x’ is the overall displacement in time ‘t’.

Suppose a child puts a step forward and returns back to the same position by taking a step in the backward direction. So, in this case, the overall change in position will be 0. Thus the velocity will be 0. To increase the velocity there must be an appropriate change in the position of the object with respect to time.

As velocity is a vector quantity thus direction is an important factor to consider while evaluating velocity. So, we can say that velocity is the result of the overall displacement of a body per unit of time.

Suppose a body starts moving with velocity ‘a1’ and finally attained a velocity ‘a2’. Thus acceleration will be:

If a body moves with a fixed velocity all along its way, then this indicates that there is no change in velocity of the object with time. Thus the acceleration of the object will be 0. However, when the change in velocity for each specific time interval is the same then it is said that the body is exhibiting constant acceleration. So for a moving object whether the rate by which velocity is changing is constant or variable, it is said to be an accelerating object.

The figure below shows the graphical representation of positive, negative, and zero acceleration: 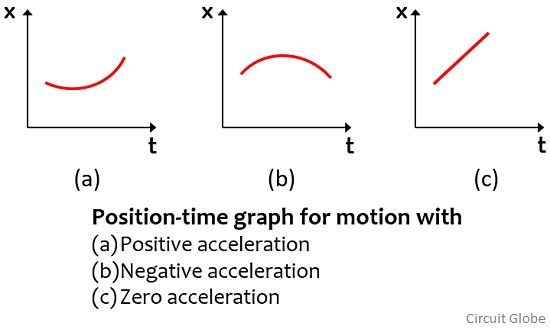 As acceleration is a vector quantity by nature, having both magnitude and direction. Thus it can be the result of a change in either speed, direction or both. A free-falling object exhibits uniform acceleration. However, a vehicle with varying speed in equal time interval is said to possess non-uniform acceleration.

Key Differences Between Velocity and Acceleration

Both velocity and acceleration are vector units thus are associated with a magnitude as well as direction. Along with this both the values can be positive, negative or zero depending upon change.