What is a Wave?

A wave is regarded as a disturbance that has propagating ability through a medium without transferring the matter. More simply, we can say, the oscillation of disturbance results in a wave. Basically, the pattern obtained without any specific flow of matter is known as a wave. The transmission of the signal through waves is the base of communication systems.

Stationary waves or standing waves are the waves that possess vertical oscillating movement but do not undergo forward motion in a horizontal direction. It is the result of the superposition of two identical waves of the same amplitude and frequency that are propagating in the opposite direction.

Stationary wave generates vibration pattern within the medium thus energy is confined within it. It never appears to get traveled as the nearby points of the wave are of similar phase and so the energy is not transferred from one point to another.

Here all the molecules oscillate with their own specific velocity and thus the energy is not transferred through the vibration and so is confined within the medium.

A progressive or traveling wave is the one that allows propagation of energy through the medium as the wave continuously travels in one direction where the amplitude is kept constant. Basically, the molecules in the progressive wave transfer their oscillating energy in the forward direction. This leads to the propagation of energy from one point to another through the medium. 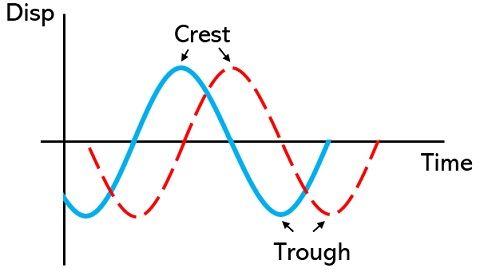 Here the particles of the wave are under motion in a continuous manner with similar maximum propagating velocity. These are of two types: longitudinal waves and transverse waves.