Schottky and Frenkel Defects are the two crucial subcategories of point defect. The significant difference between Schottky and Frenkel Defect is that the Schottky defect arises when atoms (consisting of both cation and anion) are missing from the crystal lattice. As against, Frenkel defect arises when a smaller ion (in general cation) gets dislocated from its actual position to an interstitial site.

What is a defect?

Defect in solids, in general, corresponds to the irregularities in the constituent particles that form the crystalline structure. Generally, a missing atom or an impurity in place of the actual atom leads to a defect in the solid. You must note here that the physical and chemical behavior of the solids varies with the defect present in that particular solid material.

As we have discussed that Schottky and Frenkel defects are part of point defect. Basically, a point defect is an error at the atomic site in a crystal. Sometimes this can be in a form of a missing atom representing vacancy while sometimes atoms get displaced from the correct site to a location that generally remains unoccupied and this location is called an interstitial site.

The Schottky defect is a vacancy defect exhibited by ionic solids. In this defect, the ions of the solid (both cation and anion) leave their place vacant and move out from the crystal lattice. This creates vacancy within the crystalline structure. The figure below represents Schottky defect: 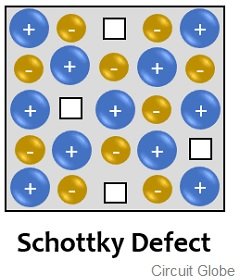 It is clear from the figure shown above that in the crystalline solid, at some points there is an ionic vacancy. You can clearly see that the ions that have left their places are not dislocated to any empty space within the lattice. This results in a decrease in the overall density of the material. 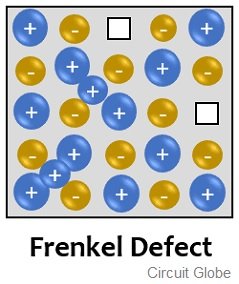 From the figure given above, we can say that here the cation has left its original position which is vacant and displaced to space that is not occupied by an ion within the crystal lattice itself.

The above discussion concludes that both Schottky and Frenkel defects are associated with crystalline solid and leads to cause vacancy at the actual site. But the difference is in Schottky defect the ions leave the crystal lattice completely but in Frenkel defect the ions take an interstitial site within the lattice.

A crystalline solid, silver bromide (AgBr) is the one that displays both Schottky and Frenkel defect.