RS-232 and RS-485 are the two types of standard serial communication protocols. Both are used to facilitate serial communication between devices however, the two are different in many ways. The significant difference between RS-232 and RS-485 is noticed on the basis of their data cable type. RS-232 offers the single-ended type of line configuration. On the contrary, RS-485 offers a differential type of line configuration.

RS-485 is known to be the advancement of RS-232 that supports technological upgradations.

What are serial communication protocols?

In the case of an embedded system, a set of pre-defined rules that facilitate the transfer of data bits between two programmed units one after the other, is known as serial communication protocols. RS-232 and RS-485 are asynchronous types of standard protocols, where transmission and reception are not clock synchronized.

RS-232 serial cabling interface came into existence in the year 1962. It is known to be the oldest cabling method to form a connection between data terminal equipment and data communication equipment. For example connection of computer system with a printer.

The figure below represents an RS-232 interface between two devices:

We have already discussed that it is an asynchronous type of protocol where a clock signal is not provided. So, here the unidirectional transmission takes place in a way that to intimate the receiver regarding the transmission, a start bit is sent initially, after which the actual data sequence is sent. Also, this complete sequence is followed by parity bit and stop bit to provide the intimation to the receiver regarding completion of the sequence.

RS-485 serial cabling interface invented in 1998 is known to be an advancement of RS-232 that suits the technological advancement of the present world. This communication protocol holds the ability to handle 32 connected devices which were only 1 in the case of RS-232. Thus, it has 32 transmitter and 32 receiver terminals by which multiple devices of a single system can be connected easily. 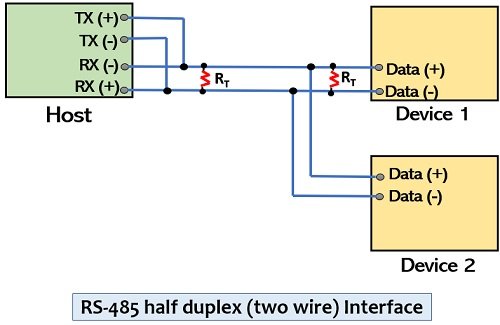 When a system is incorporated with RS-485 then the twisted pair cable arrangement offers long-distance transmission at high speed which suits various industrial applications. Before the arrival of RS-485, another standard RS-422 was invented. RS-422 also supported differential mode of operation. However, several limitations were associated with the RS-422 protocol and those limitations were eliminated by RS-485 thus is industrially used.

Generally, it is a two-wire half-duplex system but is sometimes implemented in a full-duplex manner using four wires.

Thus, according to the specifications of the two serial interfacing methods, RS-232 finds applications in embedded systems like programming of PLCs, servo drives, etc. While RS-485 is used in computing and automation systems like robotics, the light controlling system at performance venues, etc.