Before understanding the factors of differentiation of pressure and stress, let us understand-

Force in physics is defined as an act that leads to change or maintain the motion possessed by a body or an object. The quantity force is a vector in nature due to having both magnitude as well as direction. This can be said so because when a force is applied to a body then along with the magnitude of the force, the concerning direction in which force is applied also becomes important.

Whenever we apply some amount of force on an object that the action which will take place does not only dependent on the magnitude of force but the pressure with which the force is provided is of equal importance.

Now you must be thinking that why pressure is given so much importance?

This is so because the pressure is concerned with the area of the surface when force perpendicular to it is applied.

Let us understand this by considering an activity.

Suppose we have a metallic rod and an iron nail and both are needed to be hammered on a wall adjacent to each other. What do you think will easily be inserted within the wall? Obviously a nail. This is so because though the magnitude of the applied force is a crucial parameter but the area where the force is to be concentrated is equally important. 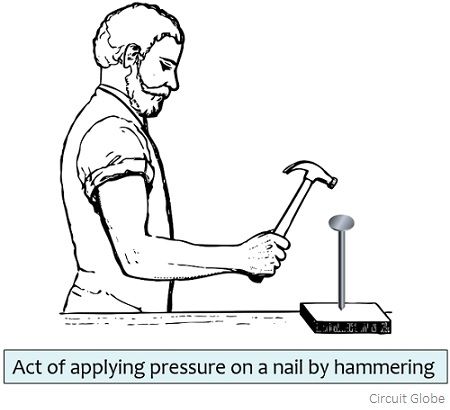 Thus, the pressure is given by the ratio of applied force to the unit area of the surface.

Its unit is Pascal.

Thus, stress is also given by the ratio of force and area. Hence unit of measurement is Pascal.

Key Differences Between Pressure and Stress

Thus, from this discussion, we can conclude that pressure and stress are two quantities that are related through force but both act differently. When we talk about pressure then it is associated with a body that is subjected to externally applied force but stress is regarded as a restoring force that is internally generated in response to deformation. Thus, we can say, stress is an outcome of applied pressure.

1 thought on “Difference Between Pressure and Stress”