PLC and DCS are the two automation approaches used for the purpose of controlling processes or machines. Technologically after advancements, the two are not much different nowadays, however, this does not mean that these are not dissimilar. The significant difference between PLC and DCS is that a PLC is a central controller designed with the aim to control processes or machines.

PLC stands for Programmable Logic Controller while DCS is an acronym used for the Distributed Control Systems. Here the names are indicating that PLC is a logic controller which is programmed so as to control processes or machines. While DCS is a system consisting of multiple controllers distributed over the plant.

Thus, it can be clearly said that PLC is a part (component) of the system while DCS is as a whole is a system comprising various other elements including PLC.

PLC is an electronic device based on a microprocessor that performs the controlling of various processes. The process controlling involves various function implementation like logical operations, counting, sequencing, timing. Also, to achieve this, memory space is required where the plc stores instructions.

In industrial applications, PLCs are designed for controlling processes or machines. It is used for handling dedicated processes as it is pre-programmed. Thus, can be used by even operators, without the requirement of a computer programmer always.

The figure below represents a simplified block diagram of the programmable logic controller: 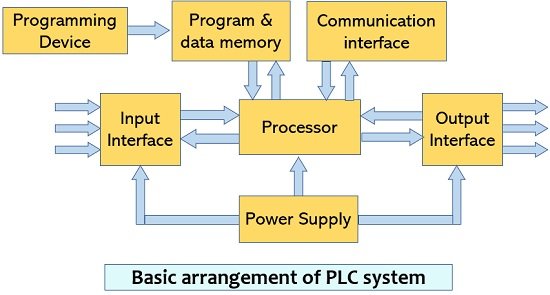 Like every other system, for a plc also, the CPU is the main element where the microprocessor is programmed to perform required control actions. The power supply energizes the processor by supplying 5V dc input to it along with other peripheral devices.

It involves operator consoles, servers, archiving, and engineering stations along with controllers for process control. 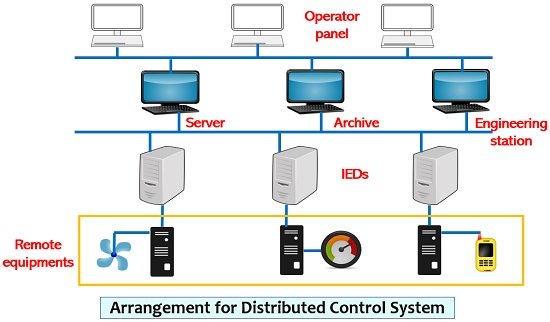 Not only controller, but a DCS involves various intelligent electronic devices (IEDs) dispersed geographically that are programmed to operate in a cooperative way to fulfill the need of the plant. The IEDs can be microcomputers, workstations, etc. The various field devices include sensors, actuators, transmitters, etc.

Key Differences Between PLC and DCS

Thus, it can be concluded that, in a single PLC-based system, if the plc gets damaged then the whole operation gets suspended. But in a DCS, the presence of various independent controllers enables other processes of the system to remain undisturbed so, the plant is not necessarily affected even when one of the controllers gets damaged.

1 thought on “Difference Between PLC and DCS”