Metals are those substances that are hard and holds the property of thermal and electrical conductivity (except tungsten). These materials are lustrous in nature and thus polishing of such elements gives rise to a reflecting surface. 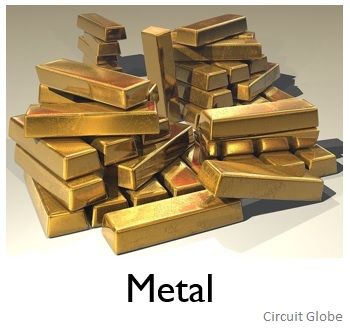 The reason behind this is that metals have free electrons present in their structure. And these free electrons vibrate when then the surface is exposed to light and thus appears as a shiny surface. However, lead stands as an exception for this particular property because lead is a metal with a dull appearance.

Metals are usually found in solid-state but mercury is an exception as it is a metal present in liquid form. Along with this, sodium and potassium are the metals that can be cut down with a knife without any sort of great force as these substances are not too hard.

Metals can be easily transformed into thin sheets and thus are said to be malleable. Furthermore, metals can be converted into thin long wires hence shows ductility. Also when the metal surface is hit with great force then a ringing sound gets produced thereby showing sonorous behaviour.

As metals have generally 1, 2 or 3 electrons in the outermost shell (except hydrogen). Thus can easily donate electrons thereby forming cations. A metal easily reacts with acid and generates hydrogen gas with a popping sound.

Non-metals are materials that are soft and possess poor electrical and thermal conductivity. This means that non-metals restrict the flow of electric current through them. However, graphite stands here as an exception because it exhibits good electrical conductivity.

Non-metals do not possess the property exhibited by the metals. They appear to be dull, but elements like iodine and diamonds are the exceptional non-metals that have a shiny appearance. 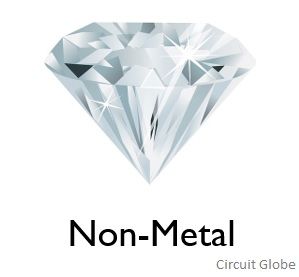 It generally exists in all 3 forms of matter i.e., solid, liquid and gas. Non-metals in solid form are generally soft and thus completely gets converted into powdered mass after the application of force on it. Thus are said to possess brittle nature.

But diamond is again an exception over here because it is one of the hardest substances hence are not brittle. Non-metals holds 4, 5, 6 or 7 electrons in their outermost shell thus usually have a tendency to accept electrons. Thus it forms anions. These elements exhibit a low degree of melting and boiling point. However, non-metals like silicon and carbon have high melting and boiling point.

Non-metals generally do not react with acid but readily react with air and are said to be great oxidizing agents.

Key Differences Between Metals and Non-Metals

So, from this discussion, we can conclude that mainly the properties of elements, distinguishes a metal from a non-metal. Also, there is a class of elements in the periodic table that are neither metals nor non-metals. As these elements combinely hold the properties of metals and non-metals both hence are known as metalloids and are present at the centre in the periodic table.

2 thoughts on “Difference Between Metals and Non-Metals”