Operational amplifiers are considered as the fundamental component of analog electronic circuits. It is a linear device that is used for amplification of the DC signal. Thus, is used in signal conditioning, filtering, and performing operations like addition, subtraction, integration, etc. The various components like resistor, capacitor, etc. present between the input and output terminals of the amplifier and are used for amplifying the voltage level of the applied signal.

It is a three-terminal device that has two inputs and one output terminal. Out of the two input terminals, one is an inverting terminal while the other is non-inverting.

This article will provide the idea regarding the various differentiating factors between the inverting and non-inverting amplifiers.

A type of op-amp that is designed to generate a signal at the output which is 180° out of phase with the applied input is known as an inverting amplifier. This implies that if the phase of the applied input signal is positive then the amplified signal will be in a negative phase. In a similar way for a signal with a negative phase, the phase of the output will be positive.

It is regarded as one of the simplest and widely used configurations of the op-amp. The figure below represents the circuit of inverting amplifier: 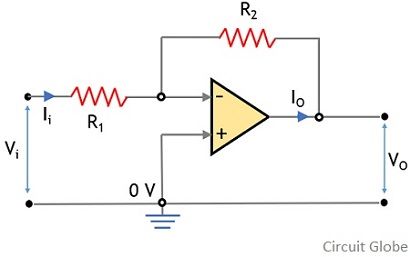 For, the above-given network, the gain is given as:

An amplifier that produces an amplified signal at the output, having a similar phase as that of the applied input is known as the non-inverting amplifier. This simply means that for an input signal with a positive phase, the output will also be positive. Also, the same goes for input with the negative phase.

The figure below represents the circuit of the non-inverting amplifier: 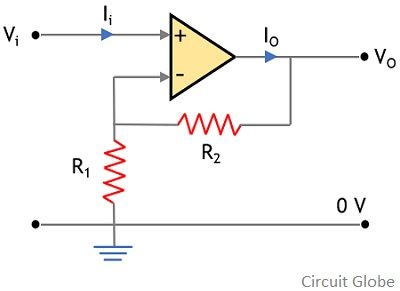 It is to be noted here that an amplifier with an inverting configuration can be converted into a non-inverting one, just be altering the provided input connections.

1 thought on “Difference Between Inverting and Non-Inverting Amplifier”