Both hardware and software are two fundamentals building blocks of computer systems. The significant difference between hardware and software is that hardware is the physical component (device or machine) of a computer system that can be seen or touched. As against, the software is known to be the virtual part of the system that is basically a collection of codes. According to these stored programs operation is performed within the system.

For a computer system to operate hardware and software are required as both show dependency on each other.

A machine that operates on binary information or data and processes a large amount of data at a very fast rate is defined as Computer. It has mainly two components that constitute a whole system, namely, computer hardware and computer software.

This discussion is all about the difference between two major types of components of computer systems.

Computer hardware or simply hardware corresponds to the physical parts of the computer system. The basic hardware of all the computers is almost similar such as CPU, storage units, input and output devices, internal buses, and power supply. The internal components of hardware units are ICs, circuit boards, and other electronic components.

CPU is considered as one of the crucial hardware components and all the stored information is mainly handled by it.

The hard disk is another computer hardware that is a storage device. It is used to hold data, programs, and instructions on which operation is performed. It is quite spacious thus can hold a large amount of data within it. It is an internal storage type of memory from which removal of data is not easy. SD cards and flash drives are two forms of external storage devices.

The peripheral devices i.e., the input and output devices are also important hardware devices. Input devices allow the users to insert data and commands into the computer. Example of such devices is keyboard, mouse, trackball, trackpad, light pens, etc. While through output devices, the processed data can be obtained as output. Examples of these devices are computer monitors, printers, speakers, etc. 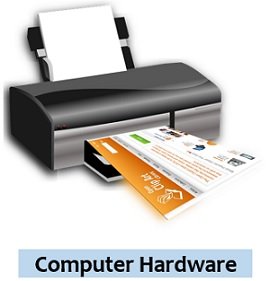 However, the operation of hardware depends on software because the tasks that are to be performed are informed by the computer software to the computer hardware.

Computer software or simply software is not any physical unit but is the collection of various instructions or codes that tells the system what is required to be done with the input data. A set of specified instructions is regarded as a program and various programs constitute software.

A computer system may operate without the installation of a certain type of software. However, in that case, the system becomes unable to give an output of any information and displays an error if the operating system or interpreter is not found. A system with properly installed software facilitates performing additional functionalities.

Key Differences Between Hardware and Software

Thus, from this discussion, we can categorize the hardware components as peripheral devices like input and output devices, storage (RAM, ROM), and various internal components. While software programs are mainly categorized as system software and application software.