Both FIR and IIR are the two major classifications of digital filters used for signal filtration. The crucial difference between FIR and IIR filters is that the FIR filter provides an impulse response of a finite period. As against IIR is a type of filter that generates impulse response of infinite duration for a dynamic system.

More simply we can say that impulse response provides the reaction of a dynamic system with respect to an independent variable (say time).In this article, we will discuss the major differentiating factors between FIR and IIR filters.

A type of digital filter that generates a finite impulse response of a dynamic system is known as FIR filters. More simply, we can say, here the impulse response provided by the filter is of finite duration. In FIR filters the response gets fixed to zero in a finite period of time thus it is named so. In the case of FIR filters, the nth order filter generates n+1 samples before getting fixed to 0.

The figure below represents a discrete form of FIR filter: 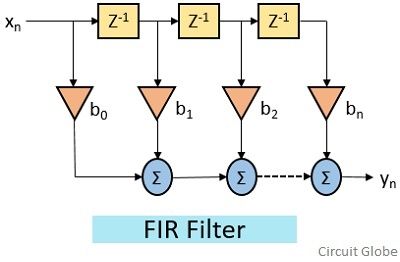 In FIR filters, feedback is not present thus these operate on only present and past input values. Hence the output is the summation of a finite quantity of finite samples of input values. So, these are highly stable. The generalized equation for FIR filter is given as:

:N is the length of the filter.

FIR filters are used with systems having 0 response.

The type of digital filter that is designed to generate infinite impulse response of a dynamic system is known as the IIR filter. As an internal feedback mechanism is present in these filters thus the filter operates for an indefinite period of time. IIR filters are used by the systems that generate an infinite response.

The filter below represents the structure of the IIR filter: 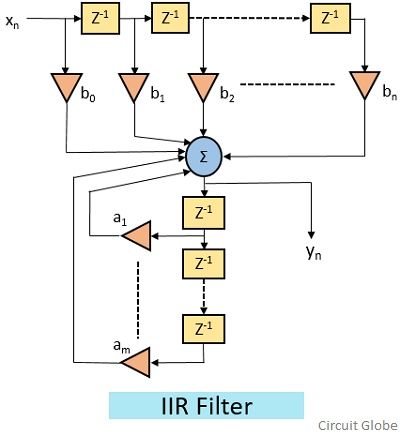 IIR filter operates in a way that not only the present and past inputs but the past output sample is also taken into consideration. The equation in general form for IIR filter is given as:

As these filters support the recursive operation. Thus it never allows its response to settle to 0 for the applied impulse. The memory requirement and computational time enhance the efficiency of the IIR filters. Also, it is quite easy to convert an analog filter into a digital IIR filter.

1 thought on “Difference Between FIR Filter and IIR Filter”