Encryption and decryption are the two terms derived from a branch of science known as ‘Cryptology‘ which is a field of network security. This word cryptology is formed by two different words cryptography and cryptanalysis.

Cryptography involves changing of actual message into unintelligible information which is known as encryption. While Cryptanalysis is the change of unintelligible data back to the original message which is called decryption commonly.

Encryption is the act of changing the information to be transmitted into an encrypted or meaningless format so as to have secured transmission of the data.

This definitely does not change the actual message to be transmitted but prevents any illegal access to that message. Even if any third party illegally manages to access the data then due to encryption, that party will not be able to get the meaning of the received data.

So, in this way encryption prevents loss of information because of unauthorized access of data. 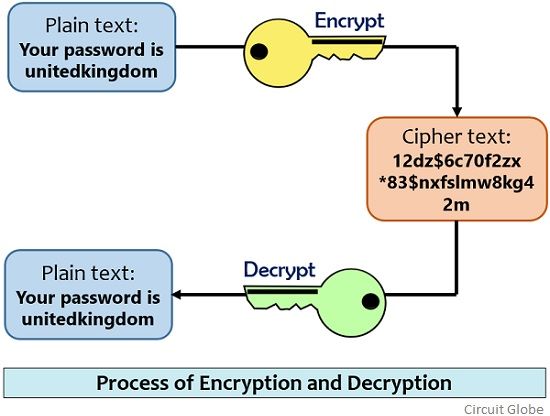 Decryption is defined as the conversion of encrypted data again to its originally generated format. Decryption is performed at the destination to which actually the data belongs. After the transmission of data in an encrypted format the receiver on gaining the access of the transmitted information changes received data into the actual message.

Basically, the key utilized to perform encryption at the sender’s side is used by the receiver to decrypt the received data so as to have the actual message. So, in this way even after receiving a coded message the receiver can determine what actually the sender wants to communicate. Hence in this way, only the desired destination gets the actually transmitted data.

Key differences Between Encryption and Decryption

So from this discussion, we can conclude that encryption and decryption both are the two sides of the same coin that combinely permits secured transmission of data without any loss in the midway.

1 thought on “Difference Between Encryption and Decryption”