Basically, the phenomenon of adding impurity to a semiconductor is known as doping. Doping contributes to the conductivity of the material. There are various factors of differentiation between donor and acceptor impurities which we will see in this content.

A dopant having 5 electrons in its valence shell when doped with a semiconductor to increase its conductivity is known as a donor impurity. It holds the ability to donate an extra electron present in its valence shell to the neighbouring atom. Thus is given the name ‘donor’. Due to the presence of excess negative charge, it forms the n-type region. Thus donor impurity is used to form n-type semiconductors.

Group V elements are said to be donor impurity because they consist of 5 electrons in the outermost shell. Thus it is also known as pentavalent impurity.

Consider that a pentavalent impurity Arsenic (As) is doped into a pure silicon structure.

As we know that arsenic has 5 electrons present in its valence shell. So, 4 electrons of arsenic form 4 covalent bonds with 4 electrons of neighbouring silicon atom as shown below: 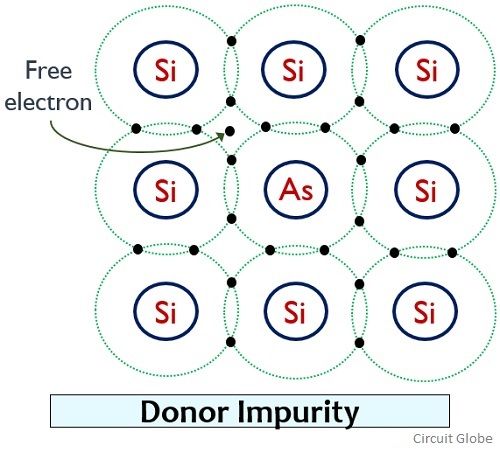 But as we can see that here an extra electron is present. This extra weakly bonded electron freely flows around the crystal even at room temperature. The movement of this free charge inside the crystal generates current. Thus the excess electron here is known as charge carrier.

Consider an aluminium atom is doped in a pure crystal of silicon: 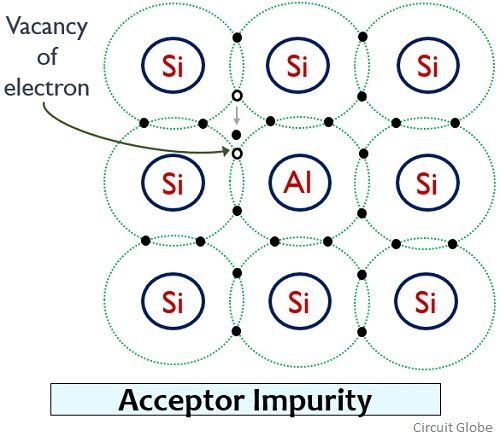 We know that aluminium atom consists of 3 electrons in the outermost shell. So, in this case, 3 electrons of aluminium form 3 covalent bonds with neighbouring silicon atom. But an incomplete bond exists because a vacancy of electron is present in the structure. This indicates the presence of excess positive charge (i.e., hole).

Thus it is said that the movement of free charge creates current.

So, from this discussion, we can conclude that impurity is added in order to enhance the conductivity of the semiconductor. However, the type of added impurity leads to cause variation in the type of charge carriers responsible for conduction.

1 thought on “Difference Between Donor and Acceptor Impurities”