Both CPU and GPU act as the key components of electronic devices. The crucial difference between CPU and GPU is the purpose of their utilization. A CPU is a general-purpose processor that is designed to execute a variety of operations. On the contrary, a GPU is a special purpose register specifically designed for graphical operations.

CPU is an acronym used for Central Processing Unit and is considered to be the brain of a computing system. A CPU carries out operation specified by the instructions present in the memory of the system. The figure below shows the basic architecture of a CPU: 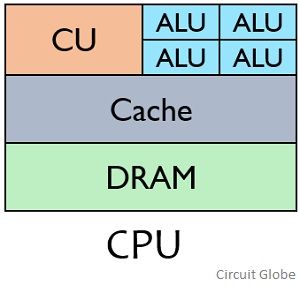 We know that the data input is in assembly level language but the computer understands only machine level language. Therefore, the data stored in the memory must be decoded into a format so that the system can perform the desired operation over it.

So here control unit comes into action and sends control signal according to the need of the system. At the time of processing the data, the input is converted into processor understandable format.

But at the time of providing output, the desired data is again converted into user understandable format. It is to be noteworthy here that a CPU has less number of units or cores that has high clock frequency. These units allow serial operation of tasks required to be performed.

GPU is an acronym used for Graphics Processing Unit. It is a circuit that holds the ability to instantly change the data in the memory in order to boost image creation in the buffer so as to have an output for display devices. It is also known as Visual Processing Unit.

It is basically a logic chip designed to execute display operations. Unlike CPU, these are only designed for computer graphics and image processing. The figure below shows the basic architecture of a GPU: 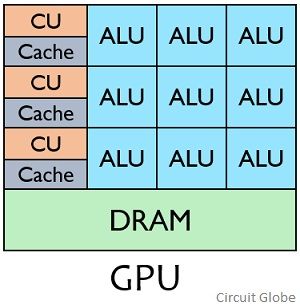 If GPU is present as a built-in unit with CPU then it shares the main memory i.e., RAM with the CPU. However, in the case of stand-alone or separate GPU, it consists of its own memory known as V-RAM. In comparison to CPU, the number of operations performed by the GPU is very less but as it supports parallelism, therefore, it has faster-operating speed.

A GPU offers high throughput whereas the overall focus of the CPU is on offering low latency. High throughput basically means the ability of the system to process a large amount of instruction in a specified/less time. While low latency of CPU shows that it takes less time to initiate the next operation after the completion of recent task.

Key Differences Between CPU and GPU

So from the above discussion, it is clear that a system comprising of both CPU and GPU provides fast results. This is so because both hold efficiency in their respective field of operation.

2 thoughts on “Difference Between CPU and GPU”